Like most guys, you probably shave 4 or 5 times a week. You do it because you need to and because the Geico caveman look hasn’t been “in” for the better part of two centuries. It’s routine and things done in routine are often done complacently, without much care. So why should you deviate from what works? We answer with a question. Why fly economy when you can fly first class? Both will get you from Point A to Point B. So what’s the difference? Of course, this is a no-brainer. First class is A LOT better – more comfortable and a better experience.

Well unfortunately, most of us are stuck in the economy class of shaving. Symbolized by the ubiquity of cheap, disposable blades, the practice of a proper shave has become a lost art. In this article, we’re going to show you that a luxurious first class shave – the wet shave – is not out of your reach. When you’re done reading, a once uninspired morning routine will become an anticipated ritual of masculinity that will help you start your work day right.

What is the Traditional Wet Shave? 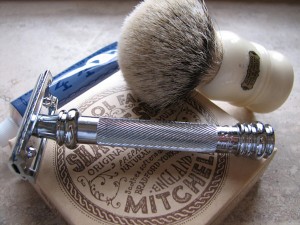 So what exactly is wet shaving? To put it simply, wet shaving is a shave whereby your face remains wet throughout the entire process and you use a single blade razor, a shaving brush and a glycerin-based shaving cream to execute the shave.

It takes a little longer than your normal shave, so use the time to get your mind going and set goals for the day. After all, your grandpa probably shaved this way and your grandpa was a wise man.

Why Should I Incorporate a Wet Shave into My Daily Routine?

What Will I Need for a Wet Shave? 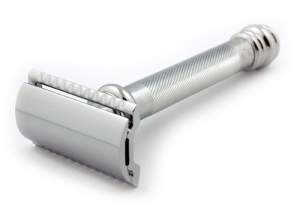 Razor Option B: The Straight Razor 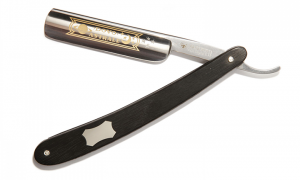 Mr. Bond’s shaving tool of choice, the straight razor is used by barbershops and shaving enthusiasts alike – basically, dudes who really know how to cut whiskers. Also called open razors or cut-throat razors, these razors provide some of the closest shaves but at the cost of a higher learning curve. If you’re just starting off, the double-edge safety razor is an aptly named safer bet (for your face). But not to worry, we’ll risk our necks and master the straight razor shave so we can throw together a step-by-step guide for you in a future post.

Brush + face = female? Most of the time, yes. This time, no. A shaving brush is used to pick up and hydrate the shaving cream so that it forms into a thicker, richer and more emollient lather than you would get with just your fingers. A shaving brush also gently exfoliates your skin, removing dead skin and debris and raising the hairs on your face in preparation for the shave. For this reason, many shave enthusiasts claim that using the proper shaving brush is the single most important element of an effective shave. And the bonus? It feels really nice.

Powered by Your Inspiration Themes